Less than 20 years after the merger with Rowntree they too were ready to be taken over. In early April, 1988 Rowntree’s shares were under attack. However, it wasn’t from Nestlé but its rival, another Swiss chocolate giant, Suchard. Both companies had chocolate businesses they hoped to strengthen in preparation for the unification of the European Common Market in 1992. Suchard grabbed a 15 per cent share of Rowntree and as the weeks passed they continued to build up its shareholding.

Rowntree’s management stated that Suchard’s move was “wholly unwelcome” but within days Nestlé was also rumoured as a possible buyer. The American sweets company Hershey was also thought to be interested in buying the company, as was US biscuit and snacks manufacture Nabisco.

On April 26th Nestlé responded and made a bid which valued Rowntree at £2.1 billion. Nestlé’s Managing Director, Helmut Maucher stated that a merger would be in the best interests of both companies. He said,

“Rowntree by itself does not have the resources to compete effectively in increasingly competitive world markets.”

Shares in Rowntree had risen because of earlier rumours and almost doubled before Suchard’s raid. However, Rowntree said that it would fight the bid.

“Nestlé has nothing that Rowntree needs, not its money, not its research and development, not its marketing and not its distribution.”

There was even a suggestion that they would consider merging with Cadbury rather than allow a Swiss take over. 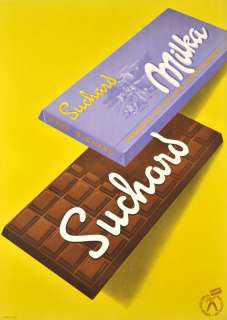 The war between the two Swiss firms raged on. Suchard continued to acquire more Rowntree shares with 29.9 per cent holding, coming just short of the 30 per cent that they needed to go for a full-scale takeover bid.

Meanwhile, another, almost forgotten army made up of 2,500 Mackintosh’s workers in Halifax expressed fears for their jobs. On May 17th, 48 of these workers headed for London to fight for Rowntree’s independence. They joined forces with 2,000 other company employees wearing “Hands off” tee shirts and carrying a life size cardboard cut out of Major Quality and Miss Sweetly and marched defiantly to the Royal Horticultural Hall before heading to the Houses of Parliament, where the Halifax army met with local MP, Alice Mahon.

Rowntree attacked Nestlé’s record as an employer in Britain, where the number of jobs for the company had fallen from 13,000 to 9,500 in six years. None of this mattered as the Government chose not to refer the merger plan to the Monopolies and Mergers Commission, leaving Rowntree to fight the Swiss giants alone.

Then suddenly the workers surrendered and called on Rowntree to arrange a friendly takeover, something they believed would be the best way to retain their jobs. Union delegates from all across the country met in York and urged chairman Kenneth Dixon to start talks with either Nestlé’s or Suchard.

The proposed merger was debated in the House Of Commons and Halifax Labour MP Alice Mahon led the attack on the Conservative Government, saying that it,

Even Yorkshire Tory MPs led a revolt of their own over the Government’s lack of intervention.

On June 25th, 1988, after a two-month battle between Nestlé and Jacobs Suchard, Rowntree was acquired by Nestlé, whose winning £2.5 billion bid made the deal the largest takeover of a British company by a foreign one up to that point. Nestlé agreed to keep Rowntree’s headquarters in York and went on to create a chocolate, confectionery, and biscuit group responsible for Nestlé’s worldwide chocolate and confectionery strategy.

Rowntree Chairman Kenneth Dixon who had previously stated that Nestlé had nothing they wanted said,

“We believe the price now offered is fair and shareholders and employees should both gain from the agreement that has been reached.”

Nestlé had won the battle for Rowntree and in 1990 Suchard was bought out by Kraft, the company that took over Cadbury in 2011