Besides Mackintosh’s there were other toffee manufacturers in the Calderdale area.
Appleyard’s Toffee manufacturing company had offices and works in Woolshops as well as The Chocolate Shop at 7 George Street in the 1920s and later Queens Road, encroaching on John Mackintosh’s domain! Their product-lines included Toffee Le-Roy, Roast Nut Toffee, Treacle Toffee, Cream Caramel Toffee, Mint Toffee and Brazil Nut Toffee. The business closed in the 1940s.
C.W. Mattock Ltd, Sowerby Bridge was set up 2 years before Mackintosh’s in 1888 and some of its customers included the National Trust and royal houses. It had property on Industrial Road and West Street, Sowerby Bridge. It was taken over in 1964 by an Ipswich Company, Burton Son and Sanders, which later merged with the Matthew Holdings group of Epsom. In 1977 it was bought by the then Managing Director, George Speak and a partner. They sold it to Jon’s Confectioners of Sowerby Bridge, which was later taken over by Wilkinson’s of Jersey. In 1990 receivers were brought in but they were unable to find a buyer. At the auction of its equipment in January 1991 there were 100 bidders including a New York firm 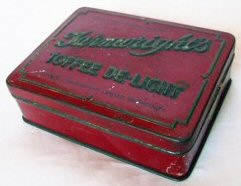 Turner and Wainwright was established in Brighouse around 1896 at premises in River Street, Bird’s Royd, Brighouse by John Henry Turner and George Wainwright. At the beginning of the 20th century, the company was making cream caramels. In 1908, they moved to Brookfoot Mill, making around 60 tons of toffee per week, and a turnover of £100,000 a year. On 11th July, 1912, there was a fire at the factory. By the 1930’s the company had ceased production.

However, these paled into insignificance compared to Riley Brothers.

The works were originally in the family home until the factory moved to the Kingston Toffee Mills in Hopwood Lane in 1911, just around the corner from John Mackintosh’s Chocolate Works on Queens Road. It was the Kingston Biscuit Factory before becoming the confectionery-making factory of Riley’s Toffees. Like Mackintosh’s Mill 9 years earlier, the mill was damaged by fire on January 2nd, 1918. It was famous for its 120 ft high chimney with the company’s name picked out in glazed white bricks, each letter being almost 7 ft tall. 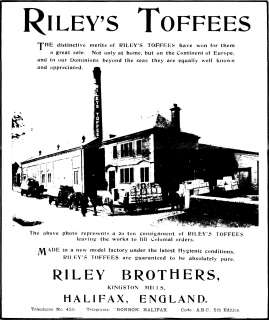 When J. H. Riley died in 1953, the company was bought by Nuttall’s. It was later bought by the Guinness Group and then by Callard & Bowser. Then in 1988 by United Biscuits / McVities and finally by the US giant, Kraft.
In 2008 Freya Sykes, niece of the founders of Riley’s Toffee started Ella Riley Ltd, named after the person who created Riley’s own toffee recipe in her Economical Recipe Book. After Ella died, Freya’s Father gave Grandmother’s recipe book to her. When she looked through it she came across her recipe for toffee, faintly written in pencil. Freya acquired the rights to Riley’s Toffee Rolls for a “modest” amount, after Kraft made it clear it had no further interest in the product.
Click on the cowboy below to listen to an audio version of the history