In September 1931, Harold Vincent Mackintosh narrowly avoided merging the company with Rowntrees of York. Both companies already had a joint subsidiary in the Republic of Ireland. Harold Mackintosh remained Chairman of the company until his death in December 1964. In May 1969 John Mackintosh & Sons Limited merged with Rowntree to become Rowntree Mackintosh Limited. Eric Mackintosh, Mackintosh’s Chairman, said that the surprising thing about the merger was not that it had taken place but that it had been so long in coming. Now the combined company was Britain’s largest confectionery business, with 28,000 employees at 22 factories exporting to 120 countries and having more than 25 per cent of the market. Rowntree had Kit Kat, Smarties, Aero, Fruit Pastilles and Black Magic and Mackintosh’s weighed in with Rolo, Munchies, Caramac and Quality Street. The joint company was worth £47 million.
To reassure people in Halifax that the merger was the best move, managing director, Martin Mackintosh said,
“We have to make it clear to the people of Halifax, 10,000 of whom are directly interested in this news, that there is no thought whatsoever of shutting here.”

Both Rowntree and Mackintosh’s Boards, Shareholders and Unions enthusiastically backed the pulling together.

During 1969 the new company negotiated an agreement with Hershey Foods Corporation allowing Hershey to market and manufacture some of its products in the United States, and in 1972 an agreement was negotiated with Fujiyi Confectionery Company Ltd. of Tokyo to manufacture selected products for the Japanese market.

The new Rowntree Mackintosh also lost no time in making more acquisitions, buying James Stedman Ltd. of Australia and the chocolate confectionery business of Chocolat-Menier S.A. in 1971; Chocolat Ibled S.A. in 1973, and the Dutch Nuts Chocoladefabriek B.V. in 1979.
The 1980s marked continued expansion and acquisitions: by 1986 it had added another 13 companies in the United Kingdom, France, Australia, the United States, and Canada. All of these acquisitions made a reorganisation necessary.
In 1984 the company was divided into four geographic regions, and in 1987, the company incorporated four new trading subsidiaries in the United Kingdom: 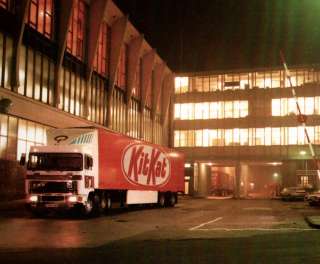